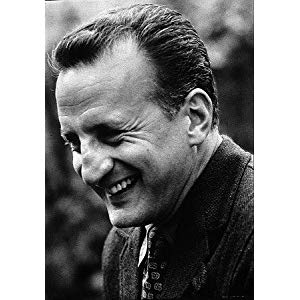 George C. Scott was an immensely talented actor, a star of screen, stage and television. He was born on October 18, 1927 in Wise, Virginia, to Helena Agnes (Slemp) and George Dewey Scott. At the age of eight, his mother died, and his father, an executive at Buick, raised him.
George C. Scott is a member of Actor

George C. Scott was an immensely talented actor, a star of screen, stage and television. He was born on October 18, 1927 in Wise, Virginia, to Helena Agnes (Slemp) and George Dewey Scott. At the age of eight, his mother died, and his father, an executive at Buick, raised him. In 1945, he joined the United States Marines and spent four years with them, no doubt an inspiration for portraying General George S. Patton years later. When Scott left the Marines, he enrolled in journalism classes at the University of Missouri, but it was while performing in a play there that the acting bug bit him. He has said it "clicked, just like tumblers in a safe."

It was in 1957 that he landed a role in "Richard III" in New York City. The play was a success and brought the young actor to the attention of critics. He soon began to get work on television, mostly in live broadcasts of plays, and he landed the role of the crafty prosecutor in Anatomy of a Murder (1959). It was this role that got him his first Oscar nomination, for Best Supporting Actor.

However, George and Oscar wouldn't actually become the best of friends. In fact, he felt the whole process forced actors to become stars and that the ceremony was little more than a "meat market." In 1962, he was nominated again for Best Supporting Actor, this time opposite Paul Newman in The Hustler (1961), but sent a message saying "No, thanks" and refused the nomination.

However, whether he was being temperamental or simply stubborn in his opinion of awards, it did not seem to stop him from being nominated in the future. "Anatomy" and "The Hustler" were followed by the clever mystery De dodenlijst van A.M. (1963), in which he starred alongside Kirk Douglas, Robert Mitchum and cameos by major stars of the time, including Burt Lancaster and Frank Sinatra. It's a must-see, directed by John Huston with tongue deeply in cheek.

The following year, Scott starred as General "Buck" Turgidson in Stanley Kubrick's comical anti-war film Dr. Strangelove or: How I Learned to Stop Worrying and Love the Bomb (1964). This became one of his favorites and he often said that he felt guilty getting paid for it, as he had so much fun making it. Another comedy followed, The Flim-Flam Man (1967), with Scott playing a smooth-talking con artist who takes on an apprentice whom he soon discovers has too many morals.

Three years followed, with some smaller television movies, before he got the role for which he will always be identified: the aforementioned General Patton in Patton (1970). This was a war movie that came at the end of a decade where anti-war protests had rocked a nation and become a symbol of youth dissatisfied with what was expected of them. Still, the actor's portrayal of this aggressive military icon actually drew sympathy for the controversial hero. He won the Oscar this time, but stayed at home watching hockey instead.

A pair of films that he made in the early 1980s were outstanding. The first of these was The Changeling (1980), a film often packaged as a horror movie but one that's really more of a supernatural thriller. He plays John Russell, a composer and music professor who loses his wife and daughter in a tragic accident. Seeking solace, he moves into an archaic mansion that had been unoccupied for 12 years. However, a child-like presence seems to be sharing the house with him and trying to share its secrets with him. From learning of the house's past, he discovers its horrific secret of long ago, a secret that the presence will no longer allow to be kept.

Then he starred -- along with a young cast of then largely unknowns, including Timothy Hutton, Sean Penn and Tom Cruise -- in the intense drama Taps (1981). He played the head of a military academy that's suddenly slated for destruction when the property is sold to local developers who plan to build condos. The students take over the academy when they feel that the regular channels are closed to them.

Scott kept up in films, television and on stage in the later years of his life (Broadway dimmed its lights for one minute on the night of his death). Among his projects were playing Ebenezer Scrooge in a worthy television update of A Christmas Carol (1984), an acclaimed performance on Broadway of "Death of a Salesman", the voice of McLeach in Disney's The Rescuers Down Under (1990) and co-starring roles in television remakes of two classic films, 12 Angry Men (1997) and Inherit the Wind (1999), to name just a few. After his death the accolades poured in, with Jack Lemmon saying, "George was truly one of the greatest and most generous actors I have ever known," while Tony Randall called him "the greatest actor in American history".