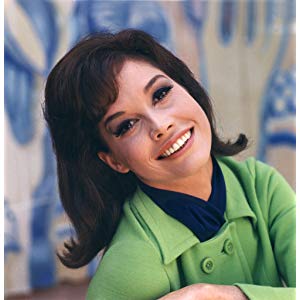 Mary Tyler Moore was born on December 29, 1936, in Flatbush, Brooklyn, to Marjorie (Hackett) and George Tyler Moore, a clerk. Her maternal grandparents were English immigrants, and her father was of English, Irish, and German descent.
Mary Tyler Moore is a member of Actress

Mary Tyler Moore was born on December 29, 1936, in Flatbush, Brooklyn, to Marjorie (Hackett) and George Tyler Moore, a clerk. Her maternal grandparents were English immigrants, and her father was of English, Irish, and German descent. Moore's family relocated to California when she was eight. Her childhood was troubled, due in part to her mother's alcoholism. The eldest of three siblings, she attended a Catholic high school and married upon her graduation, in 1955. Her only child, Richard Meeker Jr., was born soon after.

A dancer at first, Moore's first break in show business was in 1955, as a dancing kitchen appliance-Happy Hotpoint, the Hotpoint Appliance elf, in commercials generally broadcast during the popular sitcom The Adventures of Ozzie and Harriet (1952). She then shifted from dancing to acting and work soon came, at first a number of guest roles on television series, but eventually a recurring role as Sam, Richard Diamond's sultry answering service girl, on Richard Diamond, Private Detective (1957), her performance being particularly notorious because her legs (usually dangling a pump on her toe) were shown instead of her face.

Although these early roles often took advantage of her willowy charms (in particular, her famously-beautiful dancer's legs), Moore's career soon took a more substantive turn as she was cast in two of the most highly regarded comedies in television history, which would air first-run for most of the 1960s and 1970s. In the first of these, The Dick Van Dyke Show (1961), Moore played Laura Petrie, the charmingly loopy wife of star Dick Van Dyke. The show became famous for its very clever writing and terrific comic ensemble-Moore and her fellow performers received multiple Emmy Awards for their work. Meanwhile, she had divorced her first husband, and married advertising man (and, later, network executive) Grant Tinker.

After the end of The Dick Van Dyke Show (1961), Moore focused on movie-making, co-starring in five between the end of the sitcom and the start of Mary Tyler Moore (1970), including Thoroughly Modern Millie (1967), in which she plays a ditsy aspiring actress, and an inane Elvis Presley vehicle, Change of Habit (1969), in which she plays a nun-to-be and love interest for Presley. Also included in this mixed bag of films was a first-rate television movie, Run a Crooked Mile (1969), which was an early showcase for Moore's considerable talent at dramatic acting.

After trying her hand at movies for a few years, Moore decided, rather reluctantly, to return to television, but on her terms. The result was Mary Tyler Moore (1970), which was produced by MTM Enterprises, a company she had formed with Tinker, and which later went on to produce scores of other television series. Moore starred as Mary Richards, who moves to Minneapolis on the heels of a failed relationship. Mary finds work at the newsroom of WJM-TV, whose news program is the lowest-rated in the city, and establishes fast friendships with her colleagues and her neighbors. The sitcom was a commercial and critical success and for years was a fixture of CBS television's unbeatable Saturday night line-up. Moore and Tinker were determined from the start to make the sitcom a cut above the average, and it certainly was-instead of going for a barrage of gags, the humor took longer to develop and arose out of the interaction between the characters in more realistic situations. This was also one of the earliest television portrayals of a woman who was happy and successful on her own rather than simply being a man's wife. Mary Tyler Moore (1970) is generally included amongst the finest television series ever produced in America.

Moore ended the sitcom in 1977, while it was still on a high point, but found it difficult to flee the beloved Mary Richards persona-her subsequent attempts at television series, variety programs, and specials (such as the mortifying disco-era Mary's Incredible Dream (1976)) usually failed, but even her dramatic work, which is generally excellent, fell under the shadow of Mary Richards. With time, however, her body of dramatic acting came to be recognized on its own, with such memorable work as in Ordinary People (1980), as an aloof WASP mother who not-so-secretly resents her younger son's survival; in Finnegan Begin Again (1985), as a middle-aged widow who finds love with a man whose wife is slowly slipping away, in Lincoln (1988), as the troubled Mary Todd Lincoln, and in Stolen Babies (1993), as an infamous baby smuggler (for which she won her sixth Emmy Award). She also inspired a new appreciation for her famed comic talents in Flirting with Disaster (1996), in which she is hilarious as the resentful adoptive mother of a son who is seeking his birth parents. Moore had also acted on Broadway, and she won a Tony Award for her performance in "Whose Life Is It Anyway?"

Widely acknowledged as being much tougher and more high-strung than her iconic image would suggest, Moore had a life with more than the normal share of ups and downs. Both of her siblings predeceased her, her sister Elizabeth of a drug overdose in 1978 and her brother John of cancer in 1991 after a failed attempt at assisted suicide, Moore having been the assistant. Moore's troubled son Richie shot and killed himself in what was officially ruled an accident in 1980. Moore was diagnosed an insulin-dependent diabetic in 1969, and had a bout with alcoholism in the early 1980s. Separated from Tinker since 1979 (they divorced in 1981), she had been married to physician Robert Levine since 1983. Despite the opening credits of Mary Tyler Moore (1970), in which she throws a package of meat into her shopping cart, Moore was a vegetarian and a proponent of animal rights. She was an active spokesperson for both diabetes issues and animal rights.

On January 25, 2017, Mary Tyler Moore died at age 80 at Greenwich Hospital in Greenwich, Connecticut, from cardiopulmonary arrest complicated by pneumonia after having been placed on a respirator the previous week. She was laid to rest during a private ceremony at Oak Lawn Cemetery in Fairfield, Connecticut.