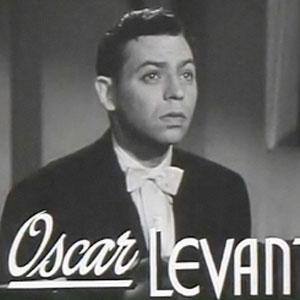 Pianist, composer, and intellectual who became known for his witty appearances on The Jack Paar Show and other TV fare.

He studied with famed piano pedagogue Zygmunt Stojowski after moving to New York in 1922 following his father's death. He also studied with Arnold Schoenberg and became close friends with George Gershwin.

He scored over 20 movies from 1929 until 1948 and wrote several pop songs that hit the charts, of which 1934's Blame It on My Youth became his most famous.

He married Barbara Wooddell on January 5, 1932, but the marriage barely lasted a year. He later married June Gale on December 1, 1939.