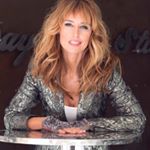 She studied journalism at the University of the Basque Country before getting a job with Diario de Noticias de Navarra.

She married Aitor Senar in 2000. Together they have a daughter named Uxue.

She and Jeff Probst have both hosted versions of Survivor.