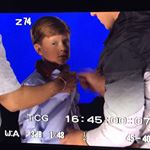 Son of Kim Zolciak best known for having appeared on The Real Housewives of Atlanta with his mom.

He has been showed playing the guitar, basketball, and cooking on The Real Housewives of Atlanta.

He has been viewed as the funniest and most rambunctious of the Biermann clan.

His sister, Brielle Biermann, has also received a lot of attention for having appeared on her mom's show.