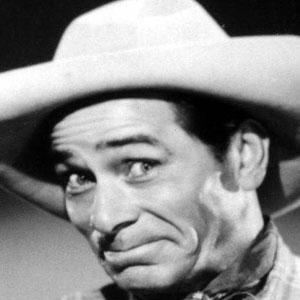 Remembered for his roles in numerous Roy Rogers Western films, this 20th-century comedic character actor and musician also frequently appeared on the popular television shows The Beverly Hillbillies and Gunsmoke. He became famous for his comic facial expressions and for his trademark character stutter.

At the age of seventeen, after watching a traveling comedy show, he decided that he wanted to become an entertainer and moved to California to pursue his dream. Shortly after arriving in Los Angeles, he became a fiddle player with a country band called the Hollywood Hillbillies.

During the late 1930s, he was a regular performer on a Cincinnati, Ohio radio program called Boone County Jamboree.

Born George Clinton Fisher, Jr., he grew up in Grady County, Oklahoma, as the fourth and youngest child of a Scots-Irish farmer father and a half-Native American (Choctaw) mother. In 1935, he married Peggy Summers.