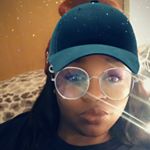 She was born from a previous relationship her mother had before marrying Doug Christie in 1996.

Throughout much of her childhood, she was raised by her grandmother until she passed away from cancer.

She has two younger half siblings, Douglas Jr.