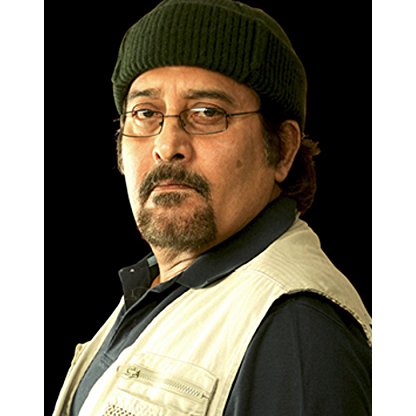 Vinod Khanna was born on October 06, 1946, is Actor, Producer. At the start of his career, he played supporting or villainous characters in films such as Purab Aur Paschim, Sachaa Jhutha, Aan Milo Sajna, and Mastana in 1970, and in Mera Gaon Mera Desh, Elaan and Aan Milo Sajna in 1971.He got his first break as the solo lead hero in the film Hum Tum Aur Woh (1971), which was followed by the 1971 multi-hero film 'Mere Apne' directed by Gulzar. It was the melodious R.D.Burman composed Rafi-Asha "Sasoan Mein Kabhi" from the film Parchaiyaan in 1972 and from Hum Tum Aur Woh - the Kishore Asha duet Do Bataon Ki Mujhko Hai Tamanna and the solo song Priye Praneswhari where his romantic skills got noticed among audiences.In 1973, his performance as an army officer facing death row in another film scripted and directed by Gulzar, Achanak, was critically acclaimed. The song-less film echoed the true life story of K. M. Nanavati vs. State of Maharashtra and Khanna portrayed Kawas Nanavati, the real life Navy officer.Between 1973 and 1982, Khanna played the lead role in in a number of solo and multi starer movies.In films with 'Rajesh Khanna' as the lead hero, Vinod Khanna always had either the antagonist role or supporting role and not even the parallel lead. These film were Sachaa Jhutha Aan Milo Sajna, Prem Kahani, Kudrat and Rajput. Vinod accepted his roles in Kudrat and Rajput even after he had become a successful solo lead hero himself just due to rapport he shared with Rajesh Khanna. His successful films as solo lead hero include 'Farebi' with Moushumi Chatterjee;Qaid in 1975 and 'Zalim' in 1980, both together with Leena Chandavarkar; and Inkaar in 1978 opposite Vidya Sinha followed by Aap Ki Khatir, Hatyara, Main Tulsi Tere Angan Ki, Khoon Ki Pukar, Taaqat, Jail Yatra, Raajmahal. His successful multi hero films, with him also playing the main lead hero, were Shankar Shambhu,Chor Sipahee and Ek Aur Ek Aur Ek Gyarah, where he appeared together with Shashi Kapoor; in Hera Pheri, Khoon Pasina, Amar Akbar Anthony and Muqaddar Ka Sikandar where he played lead hero with .Amitabh Bachchan; and in Haath Ki Safai and Aakhri Daku where he played lead hero with Randhir Kapoor. He later appeared as lead hero with Sunil Dutt in ,Daku Aur Jawaan.Khanna became a follower of the spiritual teacher Osho (Rajneesh) and left the film industry in 1982 for five years. Though he had stopped ,acting in films in 1982, the films with him as the main lead released in 1982(film-s for which he had completed shooting by the end of the year 1981) like Raj Mahal, Taaqat and the multi star Rajput , where Vinod Khanna played supporting role to main lead heroes Rajesh Khanna and Dharmendra were successful.He returned to Bollywood with Insaaf where he played together with Dimple Kapadia, became a hit.After his comeback he played romantic roles in Jurm and Chandni, but he was mostly offered roles in action films.After he made comeback in 1987, his successful solo hero films released in 1987-88 were Satyamev Jayate, Insaaf , Faisla, Mahaadev, Aakhri Adaalat. Aruna Raje's Rihaee (1990) where he played an emancipated man who accepts his wife's straying and Gulzar's underrated metaphysical melodrama, Lekin (1991) are regarded as his great work.His on screen pair with Meenakshi Seshadhri was widely appreciated and the pair had hits like Satyamev Jayate, Mahaadev,Jurm, Humshakal and Police Aur Mujrim.In the 1990s, Khanna successful solo hero films C.I.D. (1990), Jurm and Humshakal. He appeared in multi-hero casts in films such as Khoon Ka Karz, Police Aur Mujrim, Kshatriya, Insaaniyat Ke Devta, Ekka Raja Rani, Eena Meena Deeka, and the 2002 film Kranti. In 1997 he was the producer for Himalay Putra, in which he also starred, together with his son Akshaye Khanna.
Vinod Khanna is a member of Actor 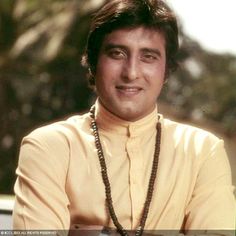 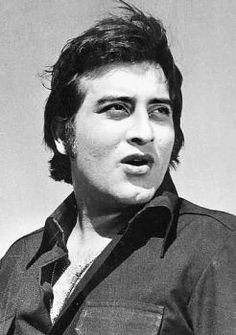 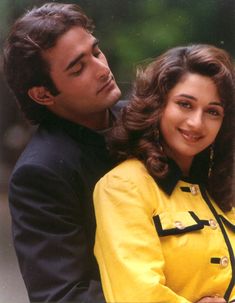 Khanna was born in a Punjabi Hindu family to Kamla and Krishanchand Khanna on 6 October 1946, in Peshawar, British India (now in Pakistan). He had three sisters and one brother. Shortly after his birth, India was partitioned and the family left Peshawar and moved to Mumbai.

He attended St. Mary's School, Mumbai until class II and then transferred to Delhi. In 1957, the family moved to Delhi where he attended Delhi Public School, Mathura Road. Although the family moved back to Mumbai in 1960, he was sent to Barnes School in Deolali, near Nashik. During his time at the boarding school Khanna watched the epics Solva Saal and Mughal-e-Azam and fell in love with motion pictures. He graduated with a commerce degree from Sydenham College, Mumbai. He loved cricket. "The public may think I am just another filmstar, but there was a time when I played fair cricket with (Test player) Budhi Kunderan. Later I played with Eknath Solkar at the Hindu Gym. I used to bat at No. 4 but settled for films the moment I realised I couldn't be a Vishwanath! Even so cricket, not films, is my first love," he wrote in The Illustrated Weekly of India in 1979.

Vinod was spotted by Sunil Dutt after graduation, and made his acting debut in Sunil Dutt's 1968 film Man Ka Meet (directed by Adurthi Subba Rao) as a villain and in which Som Dutt was the hero, a remake of the Tamil film Kumari Penn. At the start of his career, he played supporting or villainous characters in films such as Purab Aur Paschim, Sachaa Jhutha, Aan Milo Sajna and Mastana in 1970, and in Mera Gaon Mera Desh and Elaan in 1971.

Khanna met his first wife Gitanjali in college. Khanna married Gitanjali in 1971 and had two sons with her, Rahul and Akshaye; both became Bollywood actors. In 1975, he became a disciple of Osho and in the early 1980s, moved to Rajneeshpuram. Khanna and Gitanjali settled for a divorce in 1985.

Between 1973 and 1982, Khanna played the lead role in movies which included Farebi and Hatyara with Moushumi Chatterjee; Qaid in 1975 and Zalim in 1980, both with Leena Chandavarkar; and Inkaar in 1978 opposite Vidya Sinha. He did successful movies such as Dhamkee with Kumkum, Gaddaar (1973 film) with Yogita Bali, Aap Ki Khatir (1977 film) opposite Rekha, Raajmahal with Neetu Singh, Khoon Ki Pukaar, Shaque and Adha Din Aadhi Raat with Shabana Azmi, Aarop with Saira Banu, Taaqat with Rakhee and Parveen Babi, Jail Yatra and Insaan (1982 film) opposite Reena Roy, Daulat (1982 film) with Zeenat Aman and The Burning Train with Parveen Babi. In 1980, he starred in Feroz Khan's Qurbani (1980) which became the highest-grossing film of that year. He was, at the time, one of the highest paid actors in Hindi films.

Khanna's Amar Akbar Anthony and Muqaddar Ka Sikandar were the highest grossing Indian movies of 1977 and 1978 respectively. Muqaddar Ka Sikandar was the third highest-grossing Hindi movie in the 1970s after Sholay and Bobby. Main Tulsi Tere Aangan Ki was released in 1978. In this movie Khanna played a supporting male lead to Asha Parekh and Nutan.

Khanna became a follower of the spiritual Teacher Osho (Rajneesh) and left the film industry in 1982 for five years.

In 1987, Khanna returned to films with Insaaf in which he performed with Dimple Kapadia. After his comeback, he played romantic roles in Jurm and Chandni, but he was mostly offered roles in action films. after Amar Akbar Anthony. His Muzaffar Ali-directed Dimple Kapadia-starrer Zooni is still unreleased.

After Qurbani, he worked with Feroz Khan again in Dayavan in 1988. The movie was a remake of Maniratnam's 1987 Tamil movie Nayakan.

In 1990, upon returning to India, Khanna married Kavita Daftary, daughter of industrialist Sharayu Daftary. They had a son, Sakshi (born 1991), and a daughter, Shraddha.

In 1997, Khanna joined the Bharatiya Janata Party (BJP) and was elected from Gurdaspur constituency in Punjab in the next year's Lok Sabha poll. In 1999, he was re-elected to the Lok Sabha from the same constituency. Later, he became union minister for culture and tourism in July 2002. Six months later, he was moved to the ministry of external affairs (MEA) as Minister of State. In 2004 he won re-election from Gurdaspur. However, Khanna lost out in the 2009 general elections. In the 2014 general election he was again elected for the 16th Lok sabha from the same constituency.. No other Bollywood star has triumphed in four Lok Sabha polls (1998, 1999, 2004 and 2014). The BJP MP from Gurdaspur also served as Union minister of state for tourism and culture, as well as external affairs. .

Khanna also ventured into television, playing the male lead role of "Kashinath" in the Smriti Irani-produced Hindi serial Mere Apne, which aired on the channel 9X in 2009. In 2014, he played the lead role in Koyelaanchal, in which he played the role of a Godfather and leader of the coal mafia. He made his last film appearance in the 2015 film Dilwale alongside Shah Rukh Khan. The film was directed by National awards-winning film Director Rohit Shetty and released on 18 December 2015 worldwide.He also acted in the film EK THI RANI AISI BHI,a biopic based on the life and times of Vijaya raje Scindia of Gwalior. The film was released in 2017 and also premiered on Zee T.V.