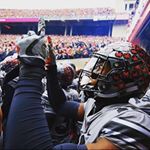 Football player who's best known for playing for the NFL's Ohio State University.

He graduated from Nordonia High School in Macedonia, Ohio.

His parents are Nicole and Paul Ward.

Both he and Cleveland Browns.