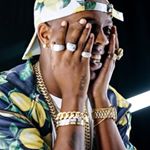 He began generating a following in 2015.

He has a daughter named Liris.