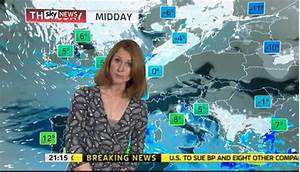 Isobel Lang was born on July 16, 1970 in England. Red-haired weather presenter who is known for broadcasting with Sky News.
Isobel Lang is a member of TV Show Host

Red-haired weather presenter who is known for broadcasting with Sky News.

She earned a degree in Mathematics from the University of Exeter in 1991.

She has also done forecasts for BBC One, BBC World, and Channel 5.

She got married to Christopher Clarke in September 1997; the couple has a son and a daughter.

She is a well-known face of Sky News, much like news presenter Penny Smith .