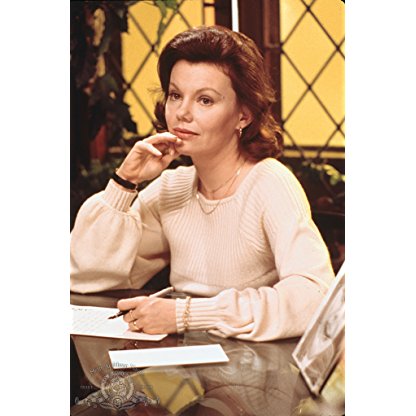 Marsha Mason was born on April 03, 1942 in  St. Louis, Missouri, United States, is Actress, Soundtrack, Director. She has a wonderful, extremely engaging "feel good" quality about her, an innate warmth that makes you root for her whether she's playing a stubborn single mom, brittle prostitute, or strung-out alcoholic. Marsha Mason was a resoundingly respected and popular film actress of the 1970s and 1980s whose career skyrocketed in the bittersweet comedies/dramas of award-winning Neil Simon. Earning a string of leading lady Oscar nominations within a short span of time (three of them, courtesy of husband Simon), Marsha's movie career suffered a major fall-out when the famed couple parted ways in 1983 -- most probably due to her almost exclusive, amazingly successful association with him.The elder of two sisters born to James Joseph Mason and Jacqueline Helena (Rachowsky) Mason in St. Louis, Missouri, on April 3, 1942, Marsha was raised, for a time, in Crestwood, Missouri, before moving to Webster Groves (a suburb of St. Louis) and graduating from Nerinx Hall High School. There, she attended Webster University and, after receiving her degree, moved to New York where she began taking acting classes and finding some work in TV commercials in-between regular job-hunting.Marrying fellow struggling actor Gary Campbell in 1965, Marsha made an inauspicious movie debut with the forgettable Hot Rod Hullabaloo (1966). Focusing intently on stage work, she made her professional debut in 1967 with "The Deer Park" at the Theatre de Lys and, the next year, joined the cast as a replacement in the established hit comedy, "Cactus Flower", at the Royale Theatre. Subsequent work came her way both on- and off-Broadway ("It's Called the Sugar Plum", "The Indian Wants the Bronx", "Happy Birthday, Wanda June", "Richard III"). She later hooked up with San Francisco's prestigious American Conservatory Theatre and appeared in an enviable number of their productions ("The Merchant of Venice", "Private Lives", "You Can't Take It With You", "A Doll's House", "Cyrano de Bergerac", "The Crucible"). Daytime soaps played a vital part during this period of time (1969-1972), playing a hooker-turned-vampire on the popular Dark Shadows (1966) series and winning regular roles on Where the Heart Is (1969) and Love of Life (1951). Divorced in 1970, the pert-nosed, dark-haired beauty met Neil Simon, a recent widower, when he cast her in his 1973 original Broadway production of "The Good Doctor". They had a whirlwind romance and married with a few weeks. 1973 was an excellent year in other ways in that she won the second femme lead in Blume in Love (1973), starring George Segal and Susan Anspach, and then beat out such stars as Barbra Streisand for the coveted role of the hooker opposite James Caan's sailor in the realistic drama Cinderella Liberty (1973). The chemistry was electric between the two and Mason earned her first Oscar nod. Following a leading stage role in "The Heiress" (1975) and playing "Roxane" in a TV version of Cyrano de Bergerac (1975), Marsha earned two more Neil Simon-driven Oscar nominations with The Goodbye Girl (1977), opposite Oscar winner Richard Dreyfuss, and Chapter Two (1979), which reunited her with James Caan and was based on Mason and Simon's own relationship.Simon would offer his wife Oscar-worthy material one more time with Only When I Laugh (1981), as an alcoholic trying to stay on the wagon for daughter Kristy McNichol. This would be her fourth and final Academy Award nod. The couple's last film project together came in the form of Max Dugan Returns (1983), which was a major misfire. Marsha's divorce that same year from Simon took the wind right out of her sails as her film product decreased rapidly in quantity as well as quality. With the exception of the Clint Eastwood vehicle, Heartbreak Ridge (1986), she made no other films in the 1980s. While her film output did increase in the 1990s, none of them -- Stella (1990), Drop Dead Fred (1991), I Love Trouble (1994), Nick of Time (1995) and 2 Days in the Valley (1996) -- did anything to jump-start her waning cinematic career.Over the years, Marsha maintained by focusing on TV and stage work. More recent theatre credits have included "The Night of the Iguana", "The Prisoner of Second Avenue" (another popular Simon work in which she appeared opposite Richard Dreyfuss in London), "Wintertime", "Steel Magnolias", "I Never Sang for My Father", "All's Well that Ends Well" and the Simon play "California Suite", some of which played Broadway. On the small screen, she starred in her own short-lived series Sibs (1991) and appeared in an Emmy-nominated recurring role on the series, Frasier (1993), as a love interest for Martin Crane. She has also appeared in a number of TV-movies, including one as Judy Garland's mother, "Ethel Gumm", in Life with Judy Garland: Me and My Shadows (2001), and has guest-starred on such series as Seinfeld Va Nhung Nguoi Ban (1989), Lipstick Jungle (2008), Army Wives (2007) and The Middle (2009). On a rare occasion, she has directed in both of these mediums. Feeling out of sorts in Hollywood at one stage, Marsha strongly pursued her spiritual side, primarily as a disciple of Swami Muktananda. She later moved to New Mexico in 1993 and she became an owner of an organic farm where she raised herbs and operated a wellness line of bath and body products. She also enjoyed professional race car driving at one point. An insightful, highly revealing autobiography came out in the form of "Journal: A Personal Odyssey" in 2000.
Marsha Mason is a member of Actress 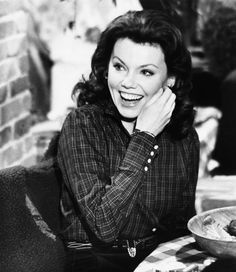 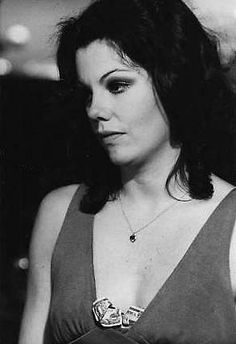 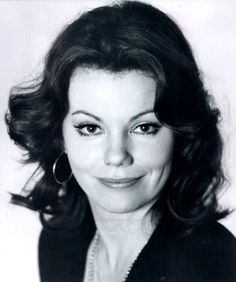 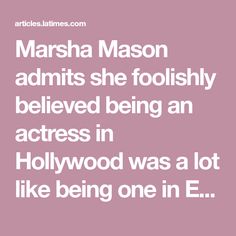 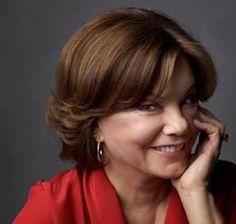 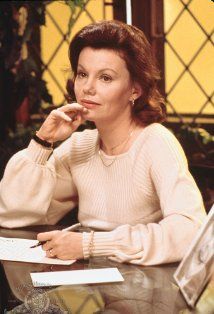 Mason was born in St. Louis, Missouri, the daughter of Jacqueline Helena (Rakowski) and James Joseph Mason, a printer. She and her younger sister, Linda (b. 1943), were raised Catholic and grew up in Crestwood. Mason is a graduate of Nerinx Hall High School and Webster University, both in Webster Groves. She raced a Mazda RX-3 in SCCA events.

Mason was married to actor Gary Campbell from 1965 until they divorced in 1970. Her second marriage, to Playwright Neil Simon, lasted from 1973 until their 1983 divorce.

She has also had an extensive career on stage, making her Broadway debut as a replacement in the comedy Cactus Flower in 1968. She starred in a 1999 revival of The Prisoner of Second Avenue in London, and received a Grammy nomination for Best Comedy Album for the 2000 recording. In 2006, she starred in the American premiere production of Hecuba at the Chicago Shakespeare Theater. Her other Broadway credits include The Night of the Iguana (1996), Steel Magnolias (2005), and Impressionism (2009).

Marsha Mason has had a distinguished career in film and theater. Her film debut in Blume in Love early 1973 had Neil Simon smitten and he cast her in his Broadway play The Good Doctor. Shortly afterwards, Mason and Simon, a widower, fell in love and got married. That same year, Mason co-starred opposite James Caan in the 20th Century Fox film Cinderella Liberty, which netted her an Oscar nomination for Best Actress. In 1977, Mason's performance in Simon's smash hit film, The Goodbye Girl, won her a second Best Actress Academy Award nomination. In 1979, Simon successfully cast Mason as Jennie MacLaine in the screen adaptation of his hit play Chapter Two, which was based on Mason's relationship with Simon up to their marriage. The film proved to be another big hit, garnering her a third Oscar nomination for Best Actress.

Her stage credits include Norman Mailer's The Deer Park, Israel Horovitz's The Indian Wants the Bronx, Neil Simon's The Good Doctor and Joseph Papp's 1974 Richard III at the Lincoln Center. Mason starred on Broadway in a revival of Night of the Iguana in 1996, and the following year in Michael Cristofer's Amazing Grace. Mason reunited with Goodbye Girl co-star Richard Dreyfuss and Writer Neil Simon in Duncan Weldon and Emanuel Azenberg's production of The Prisoner of Second Avenue in 1999, which was performed at the L.A. Theatre Works shortly after a revival in London's West End. She earned a Grammy nomination in comedy.

In 1981, Mason starred along with Kristy McNichol, James Coco, and Joan Hackett in Only When I Laugh, Simon's film adaptation of his Broadway comedy-drama The Gingerbread Lady; it was another box-office success. For her performance as Georgia Hines, Mason was highly praised and earned a fourth Best Actress Oscar nomination.

Mason's Max Dugan Returns (1983), also written by Simon, grossed a modest $17.6 million at the box office. Despite a stellar cast led by Mason, Donald Sutherland, Jason Robards and Matthew Broderick, the film was a slow starter, becoming more popular after premiering on cable TV and VHS. By this time, Mason and Simon had divorced, and her film career lost momentum. She co-starred with Clint Eastwood in the 1986 film Heartbreak Ridge, which was fairly well received and a commercial success.

Mason played in a New York production of Harold Pinter's Old Times. She next directed the play Juno's Swans (1986), by E. Katherine Kerr, at the Second Stage Theatre in Los Angeles.

A former, long-time resident of New Mexico, she had a farm in Abiquiu that grew certified organic herbs. In the late 1990s, Mason sold herbs wholesale to companies both locally and regionally before starting a line of wellness and bath and body products called "Resting in the River". Now based in New York City, Mason is currently building a new home on a hayfield in nearby Litchfield County, Connecticut.

Mason's recent television work includes guest roles on Seinfeld, Lipstick Jungle, and Army Wives. Mason starred in her own series, Sibs, which ran from 1991–92. In 1997 and 1998, she had a recurring role on the TV show Frasier as Sherry Dempsey. In February 2010, she co-starred in California Suite at the Skirball Cultural Center in Los Angeles.

She appeared in Charles L. Mee's Wintertime at the Second Stage theatre in New York. In August 2005 Mason starred as Hecuba at the Chicago Shakespeare Theater and on Broadway in Steel Magnolias, with Delta Burke, Frances Sternhagen, Rebecca Gayheart, Lily Rabe and Christine Ebersole. She appeared in A Feminine Ending at Playwrights Horizons, and in the Shakespeare Theater Company's performance of All's Well That Ends Well in Washington, D.C.

In April 2010, Mason co-starred with Keir Dullea and Matt Servitto in an Off-Broadway production of I Never Sang for My Father. For her performance as Margaret Garrison, Mason received good reviews.

Mason guest-starred in Madam Secretary (2015–16) and The Good Wife (2016), and has had recurring roles on the ABC sitcom The Middle since 2010 and the Netflix series Grace and Frankie since 2016.