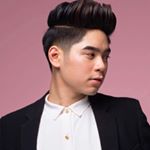 Versatile actor, dancer and singer who broke through by appearing on the series Zombies.

He began to perform on a professional level at the age of 18. He would work as a dancer with Lilly Singh, MC Jin and Hedley.

He is from Toronto, Canada.

He was featured in Lilly Singh's A Trip to Unicorn Island documentary.