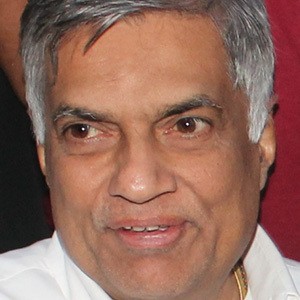 Politician who began his third stint as the Prime Minister of Sri Lanka in January 2015, having previously assumed the position in 1993 and 2001. He represents the United National Party, which he began leading in 1994.

He attended Royal College, Colombo and Sri Lanka Law College. His political career began through his membership in the United National Party in the 70s.

He was appointed leader of the United National Party following the assassination of Gamini Dissanayake.

He married English professor Maitree Wickremasinghe in 1995. He is one of five siblings.

He was briefly removed from his position of Prime Minister by President Maithripala Sirisena in 2018.