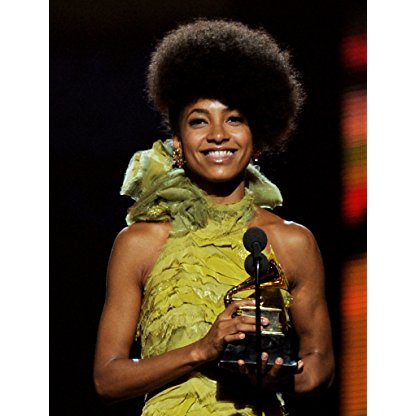 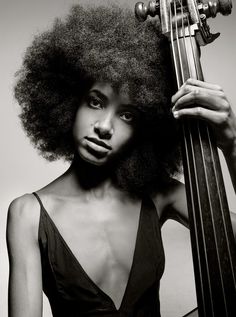 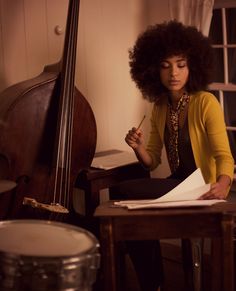 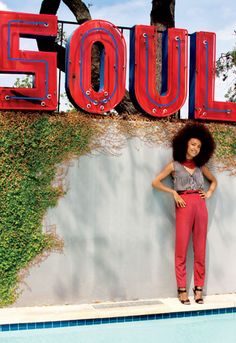 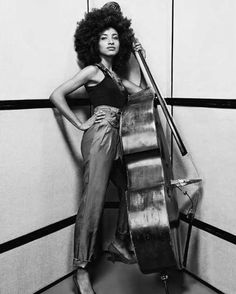 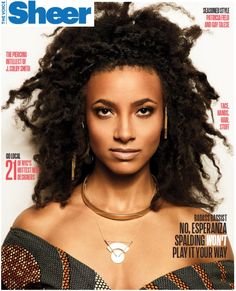 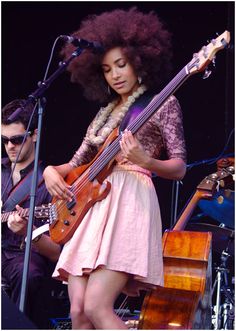 Gary Burton, Executive Vice President at Berklee, said in 2004 that Spalding had "a great time feel, she can confidently read the most complicated compositions, and she communicates her upbeat personality in everything she plays."

Her debut album, Junjo, was released on April 18, 2006, on the Ayva Music label. It was created to display the dynamic that she felt among her trio. Though Junjo was released solely under her name, Spalding considers it "a collaborative effort."

Esperanza is Spalding's second studio album. After Spalding's Grammy win in February 2011, the album entered the Billboard 200 at 138. With Esperanza, Spalding's material was meant to be more reflective of herself as an Artist, with Musicians selected to best present that material. Ed Morales wrote in PopMatters on June 23, 2008, that Esperanza is "a sprawling collage of jazz fusion, Brazilian, and even a touch of hip-hop." Siddhartha Mitter wrote in The Boston Globe on May 23, 2008, that "the big change" in Esperanza "is the singing.... This makes it a much more accessible album, and in some ways more conventional."

Spalding also was the featured final act for the opening night of the 2009 Park City Jazz Festival in Park City, Utah. She closed the show with a number along with bass artists Brian Bromberg and Sean O'Bryan Smith, who also performed earlier that day. As a tribute to Prince, Spalding was invited to sing along with Patti LaBelle, Alicia Keys and Janelle Monáe. Spalding performed the 1987 hit single "If I Was Your Girlfriend".

On February 7, 2010, Spalding became the most searched person and second most searched item on Google Search as a result of her appearance the previous evening on the PBS television program Austin City Limits.

Chamber Music Society is the third album by Spalding. After her surprise Grammy win, the album re-entered the Billboard 200 at number 34 with sales of 18,000. A video was made for the song "Little Fly". The song is a poem by william Blake set to music by Spalding. A vinyl version of the album was released in February 2011. Commenting on the album, NPR Music's Patrick Jarenwattananon wrote that, "the finished product certainly exudes a level of sophisticated intimacy, as if best experienced with a small gathering in a quiet, wood-paneled room."

During her 2012 tour, Spalding donated a portion of proceeds from merchandise sales to the non-profit organization Free the Slaves. The organization, based in Washington, D.C., works to combat human trafficking around the world.

Spalding also made guest appearances during this time, appearing on Janelle Monáe's 2013 album, The Electric Lady, on the track "Dorothy Dandridge Eyes". She also sang a jazz duet on Bruno Mars' album, Unorthodox Jukebox, called "Old & Crazy". In November 2013, Spalding released a single "We Are America" to protest the Guantánamo prison camps, with cameo performances by Stevie Wonder and Harry Belafonte.

Spalding was mentored by Thara Memory. She has cited jazz bassists Ron Carter and Dave Holland as important influences on her music—Carter for the orchestration of his playing and Holland for the way his compositional method complements his personal style. She has described the saxophone player Wayne Shorter, and singer-songwriter Milton Nascimento, as heroes. She has also noted her preference for the music of Brazil.

In March 2016, she released her fifth studio album, Emily's D+Evolution, released by Concord Records. She was also featured on the NOVA production The Great Math Mystery, talking about the connection between music and mathematics.

In December 2017 Spalding released Exposure, which is her sixth studio album. For this project, she embarked on a creative experiment beginning Thursday, September 12, 2017 at 9 a.m. PDT, setting out to create the album from start to finish in 77 consecutive hours, while streaming the whole creative process live on Facebook. Once completed, she released 7,777 limited edition recordings of the album. The packaging of the physical album included a piece of the original notepaper Esperanza used to write the lyrics and music, allowing those who witnessed the process to own a piece of the creation itself, directly from the source. About the experiment, Spalding stated on her website: "The necessity to keep going because it's live draws up another depth of creative facility that can't be reached when you know you can try again tomorrow."