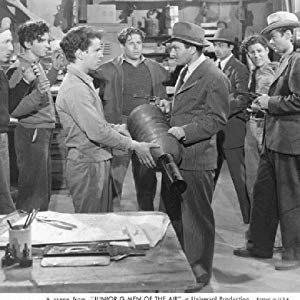 The 14th of 16 children born to an air conditioning repairman, Henry Richard Hall (he got the name "Huntz" from a brother who said his large nose made him look German) was anything but the tough street kid he played in the East Side Kids/Bowery Boys films. He made his stage debut at the age of 1 in a play called "Thunder on the Left"; after graduating from a Catholic grammar school, he attended New York's famous Professional Children's School, was a boy soprano with the Madison Square Quintette, and appeared in an experimental 1932 television broadcast. Actor/director Martin Gabel got him an audition for the play "Dead End", and Hall got the part because he could imitate a machine gun to playwright Sidney Kingsley's satisfaction. Hall appeared in a total of 81 East Side Kids/Bowery Boys features and serials, more than any other actor. In 1940 he married 18-year-old dancer Elsie May Anderson (they divorced in 1944). During WWII Hall enlisted in the Army, and after his discharge returned to Hollywood, where his first jobs were in war films playing soldiers (for his impressive work in Opmars zonder genade (1945) he received the New York Theatre Critics Circle Blue Ribbon Award).

In 1948 Hall found himself in the same kind of jam as did Robert Mitchum -- getting arrested for possession of marijuana, but he was acquitted by a jury. After the trial Hall married showgirl Leslie Wright. In the early 1950s, Hall and former Bowery Boys actor Gabriel Dell teamed up and for a "Hall and Dell" nightclub act that was so successful it cost both men their marriages; in 1953 Hall's and Dell's wives both sued for divorce, claiming the men thought more of the act than they did of them. In 1954 Hall was arrested for fighting with the manager of a building where he was attending a party; apparently the party was too noisy and the manager told the occupants to quiet down. Hall took offense at this, a fight ensued and Hall was arrested for assault, for which he paid a $50 fine and was put on probation. In 1959 he was arrested on a drunk driving charge. Having stayed out of trouble for quite some time now, Hall has been content in retirement, with occasional film and television work (not that he needed the money; in addition to owning 10% of the Bowery Boys pictures, Hall made some wise oil and gas investments that paid off handsomely).