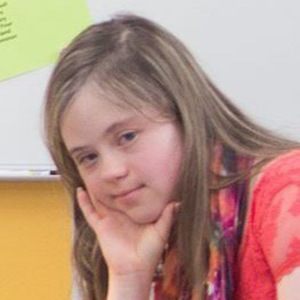 Star of the docu-reality A&E reality series Born This Way, a show detailing the lives of young adults born with Down syndrome. She previously went viral after making a speech aimed at Douglas County School District teachers titled "Don't Limit Me."

In high school, she became the first cheerleader with Down syndrome in the state of Colorado. She attended the University of Colorado at Colorado Springs in pursuit of a degree in film studies.

With her mother's help, she co-founded and became co-owner of the tie-dyed clothing line Megology. Her Born This Way series has won numerous Emmys.

She was previously in a seven-year relationship with a guy named Brendan. Her mother's name is Kris Bomgaars.

She had the privilege of meeting Michelle Obama and presenting her with tie-dyed gifts from Megology.