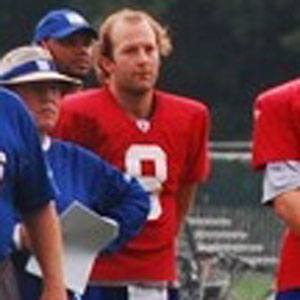 Former NFL quarterback who played for the New York Giants, Washington Redskins, Philadelphia Eagles, and Buffalo Bills. After retirement, he became a football analyst. He is the younger brother of All-Pro NFL quarterback, Matt Hasselbeck.

After a standout career at Xaverian Brothers High School, he went on to play collegiate football at Boston College.

He played with the NFL Europe's Berlin Thunder in 2002.

He married TV show host Elisabeth Hasselbeck and he and Elisabeth have three children named Taylor, Grace and Isaiah. His father also played in the NFL as a tight end.

He served as a backup to Eli Manning during his tenure with the New York Giants from 2005 to 2006.