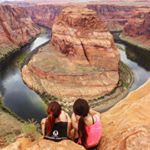 Reality star who rose to fame on season 21 of ABC's Nick Viall, before going on the show.

She works as a doula and runs her own travel blog.

She was Jade Roper's maid of honor.