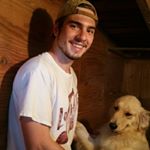 He graduated from Bishop Ireton High School in 2014 and began his tenure at James Madison University the same year.

His brother and sister's fame has translated into a large following on social media for himself, including over 50,000 Instagram followers.

He was born and raised in Woodbridge, Virginia. He also has another brother named Ryan.

His brother Matt collaborates with numerous other Viners, including Aaron Carpenter.