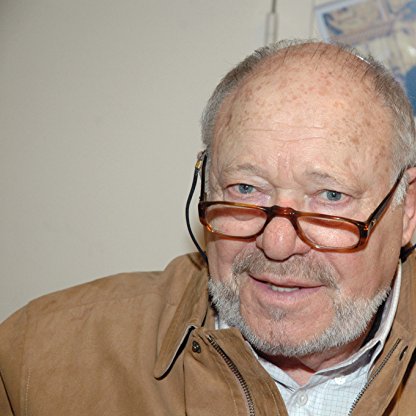 Malachi Throne was born on December 01, 1928 in  New York City, New York, United States, is Actor, Soundtrack. Malachi Throne, the character actor who became one of the more ubiquitous faces on television from the "Golden Age" of the 1950s through the 21st Century, was born in New York City on December 1, 1928, the son of Samuel and Rebecca Throne, who had immigrated to America from the Austro-Hungarian Empire. He began performing at an early age.During World War Two, the young Malachi quit school to work in theater, though he later returned and got his high school diploma. He then set out upon a life as a "wandering player", as he describes it, playing in summer and winter stock companies while matriculating at Brooklyn College and Long Island University. Though he loved acting, he believed he'd eventually wind up as an English teacher, which is why he doggedly kept at his studies between tours.When he was 21 years old, the Korean Conflict broke out, and Throne wound up in the infantry attached to an armored unit. When he returned to the New York theatrical scene, he found out that the revolution Marlon Brando had started in 1947 playing Stanley Kowalski in A Streetcar Named Desire (1951) was now the status quo.Possessed of a deep, classically trained voice, Throne was cast in the parts of characters much older than his actual age. His clear enunciation also made him a natural for live television, and he went to work on the now-defunct DuMont TV network. He continued his acting studies in New York, tutored by such luminaries as Uta Hagen and William Hickey.In addition to TV, he continued to work on the the stage, appearing in the landmark Off-Broadway production of Eugene O'Neill's "The Iceman Cometh", in support of Jason Robards. He also played in the famous Off-Broadway revivals of "The Threepenny Opera" and Clifford Odets' "Rocket To The Moon", as well as appeared on Broadway in such top shows as Jean Anouilh's "Becket" in support of Laurence Olivier.In 1958-59, he found himself in California, playing a season at San Deigo's Old Globe Theater. After his stint with the Globe was over, he went north, to Hollywood, and established himself as a major character actor in guest spots on series television during the 1960s. He had memorable appearances as "Falseface" on the Batman TV series and the Arab-styled "Thief of Outer Space" on the Lost in Space TV series. He also provided the voice of "The Keeper" for "The Cage", the pilot episode of the Star Trek (1966) series. He turned down an offer to be a regular cast member on that show, rejecting the part of Dr. McCoy as he did not want to play third fiddle to William Shatner and Leonard Nimoy. Producer Gene Roddenberry, who had offered him the role of "Bones" McCoy, was not offended by Throne turning him down, and cast him as "Commodore José Mendez" in the two-part episode "The Menagerie", which included most of the original pilot, although by then The Keeper's voice had been re-dubbed by another actor, Meg Wyllie. He also later played "Senator Pardac" in the "Star Trek: The Next Generation" two-part episode "Unification," appearing with Leonard Nimoy, whose Mr. Spock was the role he had coveted a generation before.In 1968, two years after "Star Trek" debuted, Throne was cast as Robert Wagner's boss on the TV show It Takes a Thief (1968) while continuing to guest on other TV shows. Throne also remained committed to the stage, appearing as a resident actor with a variety of regional theaters, including the SanFrancisco Actors' Workshop, the Los Angeles Inner City Repertory Co., the MarkTaper Forum and the Louisville Free Theatre.Malachi Throne lives in southern California, where he appears in local theater. When not acting, he writes historical novels. His two sons are also in show business: Zachary Throne is an actor/musician while Joshua Throne is a Producer/Unit Production Manager.
Malachi Throne is a member of Actor 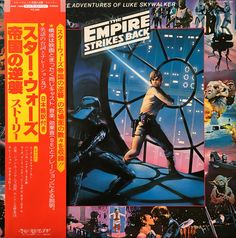 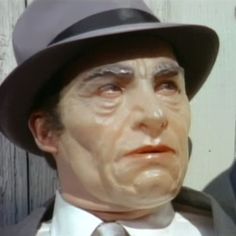 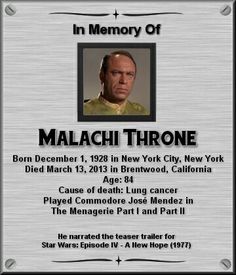 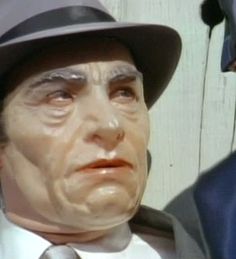 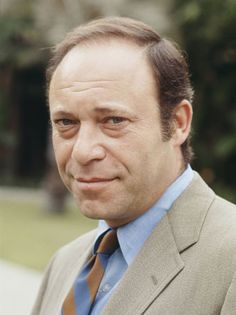 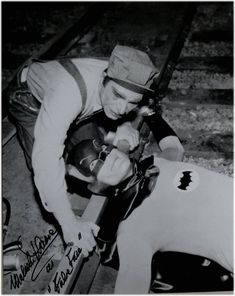 Throne was born in New York City to Austro-Hungarian Jews, Samuel and Rebecca Throne, who emigrated to America before World War II. Throne was raised in The Bronx. He first appeared on stage at the age of ten in 1939 in the New York Parks Department production of Tom Sawyer as Huckleberry Finn.

Throne was a popular guest star on many television series of the 1960s and 1970s, including Mr. Novak (four episodes), The Defenders, Naked City, The Wild Wild West, Ben Casey, The Untouchables, GE True, Combat!, The Fugitive, The Man from U.N.C.L.E. ("The Four-Steps Affair" from 1965), Mannix (as Inspector Frank Kyler in the 1967 episode, "Run Sheep Run"), The High Chaparral, Hogan's Heroes, Babylon 5 ( "The Coming of Shadows" ) and Lost in Space. He also played the character Sandifer in the 1964 Perry Mason episode The Case of the Simple Simon.

He played the villain "False Face" in the ABC Batman (1966) series. The character, who used a variety of disguises to effect his nefarious schemes, wore a semitransparent mask when not in the middle of his crimes. The mask rendered Throne's real face unrecognizable on screen. Playing off this effect, but against Throne's wishes, the show's producers wrote the onscreen credit as "? as False Face", denying Throne his screen credit. However, at the end credits of "Holy Rat Race", Throne's full name was credited. Later, he appeared in animation as the voice of Two-Face's superego "the Judge" on The New Batman Adventures (1998), and as the voice of Fingers the Gorilla on the Batman Beyond episode "Speak No Evil" (2000).

Malachi Throne was a national television spokesman for Ziebart in several advertising campaigns throughout the 1970s. He also narrated the 1976 teaser trailer for the film Star Wars (1977).

On Star Trek: The Next Generation, Throne played Pardek, a Romulan senator, in the two-part episode "Unification". In 2004, he appeared in the second episode of the New Voyages, entitled "In Harm's Way".

Throne died of lung cancer at his Brentwood, California home on March 13, 2013 at the age of 84. In addition to his widow and his sons by his first marriage to Judith Merians, he was survived by two step-children, two grandchildren, and a sister.